A review article recently published in in the Journal of “Proteome Research”, highlights the importance of studying the “Metaprotoeme”—the total proteins produced by the community of microbes in our bodies—in providing a vivid picture of the interaction between body cells and microbiome. Microbiome is a modern term that describes the total microbes that inhabit our … Continued 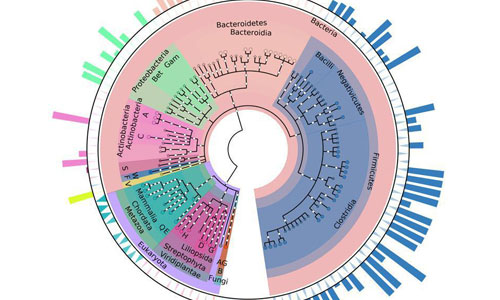 A review article recently published in in the Journal of “Proteome Research”, highlights the importance of studying the “Metaprotoeme”—the total proteins produced by the community of microbes in our bodies—in providing a vivid picture of the interaction between body cells and microbiome.

Microbiome is a modern term that describes the total microbes that inhabit our bodies. The numbers of these microbes are estimated to be trillions, and they interact with our body in symbiotic manner.

Studies conducted over the past two decades, have shown that these microbes – especially those that inhabit the digestive tract – play an important role in several of the body’s main biological processes; catalyzing metabolic pathways, inhibiting the growth of pathogenic germs and contributing to the development of the immune system, and the imbalance between these microbial communities is associated with several common diseases.

The growing number of metagenomic studies has improved the current understanding of the structure, diversity, and abundance of microbial communities in various environments such as the human intestine.

“However, studying only the genes, cannot provide us with the actual language of communication between those microbes and body cells,” says Sameh Magdeldin, the head of 57357 proteomics program, and the corresponding author on a recent paper highlighting the importance of studying the “Metaprotoeme”; the total proteins produced by the community of microbes in our bodies.

In the paper published on September 23 in the Journal of “Proteome Research”, Magdeldin and his team illustrate how investigation of the body’s metaprotoeme — provides a vivid picture of the actual interaction between our cells and our microbiome.

The genetic data coded in our DNA are transcribed into mRNA molecules, ultimately, those molecules are translated into proteins, which are the functional units that preform most of the body’s vital functions.

Consequently, simply detecting the presence of certain microbial genes does not necessarily mean that they are active, as they may come from dormant or dead microbes, and although the availability of specific mRNA sequences may serve as an indicator of gene activity, mRNA molecules could be silenced or degraded before being translated into functional protein products.

As a result, “metagenomics approaches provides a good image of diversity, while metaproteomics promises a more dynamic insight,” explains Shahad Ezz Al-Din, the first author on the paper.

The review article also covers the latest research in Metaproteomics and the mutual relationships between the host and the gut microbiota, such as the capability of certain bacterial proteins like Flagellin in stimulating the immune system, the contribution of some microbial enzymes in metabolism processes, and the impact of the metaproteome on the host proﬁle in diﬀerent disease states.

However, there are many obstacles hindering the development of metaproteomics field, as complex microbial samples requiring special isolation and preparations, the huge diversity of microbial proteins increases the likelihood of  false identification, and the analysis of the data demands huge computational power, “but these obstacles can be overcome with the rapid growth of technology,” as Magdeldin points out.

He adds that his team had succeeded in establishing a standard pipeline for metaproteomics works. In addition they are currently running several metaproteomics projects, studying the relationship between microbiome and specific types of cancer, and another project in autism.