Screening procedure for the presence of aggresomes could impact treatment protocols in the future In a recent study, a 57357 research team was able to detect the presence of aggresomes (aggregated protein inclusion bodies) in samples of pediatric Medulloblastoma (MB) tumors. This type of malignant brain cancer is the most common in children. The researchers were … Continued 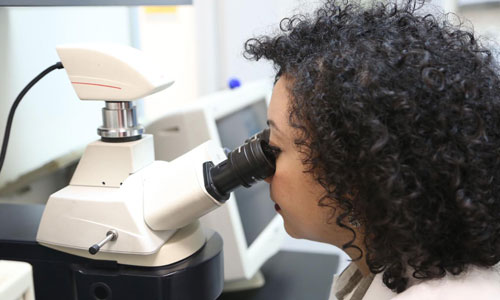 In a recent study, a 57357 research team was able to detect the presence of aggresomes (aggregated protein inclusion bodies) in samples of pediatric Medulloblastoma (MB) tumors.

This type of malignant brain cancer is the most common in children. The researchers were able to associate the accumulation of aggresomes with aggressive prognosis of the disease, which could be a relevant factor in determining the course of treatment that is most suited to the patient.

Accumulation of misfolded proteins is a familiar pathological feature in many neurodegenerative diseases including Parkinson’s, Alzheimer’s and Huntington’s disease. In cancer, aggresomes formation is limited to certain tumor types and their relevancy to cancer development and progression is yet to be explained.

In their study published in “Scientific Reports “on August 30, the 57357 research team lead by Dr Shahenda El Naggar- head of 57357’s research department- investigated tissues of 93 patient samples while following up on their prognosis throughout a duration of 5 years.

Investigation results showed that samples with accumulated aggregomes exceeding 20% of the cells, were associated with a poor prognosis of the disease.

In a previous study, El Naggar was able to identify aggresomes in choroid plexus carcinoma CPC, a malignant type of cancer while they were barely found in the benign form of the tumour, the CPP.  This led her to investigate their presence and their prognostic value in other pediatric brain tumors, mainly the aggressive types such as Medulloblastoma.

Building on their results, the team proposes that testing for the presence of aggresomes in MB tumor samples could be integrated with molecular grouping to set up a better model for predicting patients’ outcomes.

“While molecular stratification requires expensive tools and equipment, screening for the presence of aggresomes is easy and inexpensive”, reveals Maha Yehia, first co-author in the study.

She further highlights that the study would not have been possible without 57357’s advanced data base and bio-bank.

“Validating our results in larger cohort group is priority” Elnaggar emphasizes, as the team will also try to have better glimpse on the enigmatic relationship between brain tumors and aggresomes.​