“Overall, our data support that aggresomes are not only a valuable prognostic marker but might also offer a potential target for CPTs treatment in the future.” El-Naggar says. 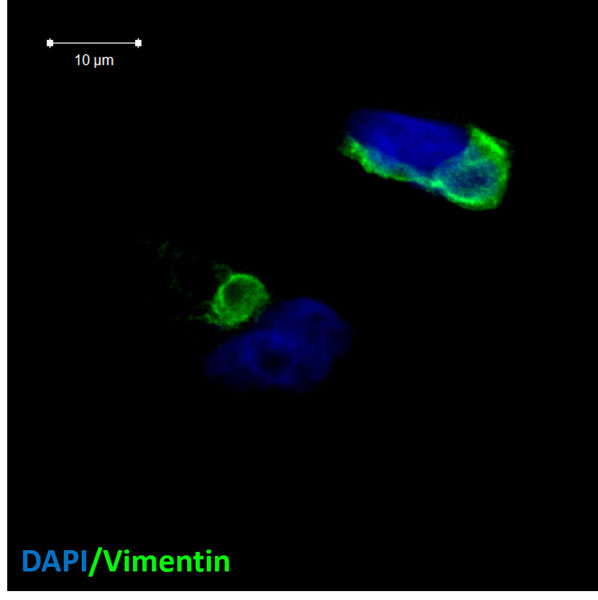 Proteins are crucial to all cellular processes. For a cell to stay viable, it has to keep its proteins in shape. In technical terms, it’s called protein folding and it refers to the process by which proteins assume their biologically functional 3D structure. proteins can quickly misfold under elevated stress or heat, misfolded proteins lose their functionality and even clump into harmful aggregates.

Therefore, proteins are constantly surveyed by a protein quality control system or PQC. The PQC can fold, refold, or if necessary, terminally degrades misfolded proteins.

However, the PQC machinery could be overwhelmed, forcing the cell to triage toxic protein waste into a garbage bin-like structure termed “Aggresome”, which acts as a PQC last line of defense, and is eventually cleared when cellular stress is alleviated.

“Cancer cells are no different, as they are highly active and rapidly dividing, they need to keep the toxic waste under control”. Says Dr. Shahenda El-Naggar, Director of the Research Department at the Children’s Cancer Hospital Egypt (CCHE) 57357.

El-Naggar is the corresponding author on the recent manuscript published in the Journal of Neuro-Oncology reporting altered PQC activity in choroid plexus tumors (CPTs), which is a rare pediatric brain tumor. After examining 42 CPTs tissues archived at the CCHE Pathology Department, her team has successfully identified a correlation between the percentage of tumor cells containing aggresomes and disease severity. They report tumors having more than 25% aggresome positive cells being the most aggressive; which may affect the treatment decision.

Traditionally, CPTs are classified according to their histological features (how they look under the microscope) into 3 subgroups, while advanced molecular classification divides this type of tumor into 2 distinct subgroups. Interestingly, all of the aggressive histological and molecular subgroups contained aggresomes.

In the current study, the team decided to further investigate the altered pathways in the aggresome-positive CPTs.

“Unravelling the main altered pathways in CPTs could deepen our understating of the disease pathogenesis, it might also uncover novel therapeutic targets” Nada Amer, the first author on the paper said.

The team extracted the whole genetic material (genome) and whole expressed proteins (Proteome) from the tumors’ tissues. Then, they performed a technique called whole-genome DNA methylation analysis that could offer a glimpse into the altered pathways between benign and malignant tumors.

DNA methylation is a normal biological process that orchestrates the activity of our genes, by adding methyl groups at certain critical locations, and switching off some genes. Any abnormal alteration of the methylation pattern disrupts the fine-tuned genomic orchestra.

The analysis revealed altered methylation signature in several genes associated with PQC activity in the aggresome-positive and the aggressive molecular type. This was also evident when the team compared the differentially expressed proteins between the distinct subgroups.

“One of the most interesting findings was the hypermethylation of members of the ZIC family of transcription factors in critical locations” Amer says.

She explains that those genes are crucial to the normal development of brain cells, and they were reported to be silenced in other types of aggressive tumors.

“Overall, our data support that aggresomes are not only a valuable prognostic marker but might also offer a potential target for CPTs treatment in the future.” El-Naggar says.