Essam Algendy, chess champion of Egypt and Africa: My dream is to see my son playing and running as before

I pledge to donate to the Hospital so long as God blessedly provides me with the means. 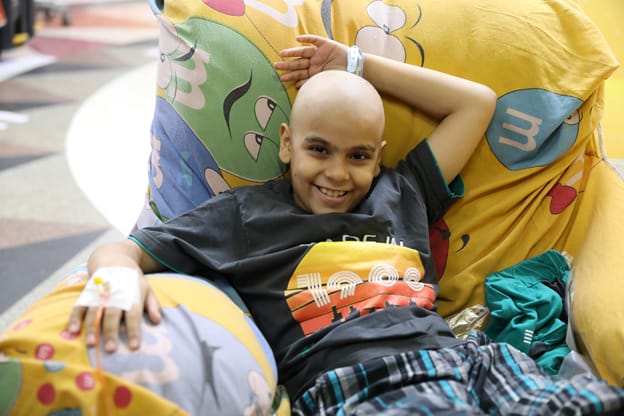 I pledge to donate to the Hospital so long as God blessedly provides me with the means.

Many of 57357’s heroes need your support throughout their battle against cancer, Ayman is one of those heroes. He is 9 years old, and he started his fight more than a year ago.

Until then, he was a happy child who liked to play and to practice basketball with his older brother Yousef. It all started with pains in his right leg. In the beginning his mother thought they were normal growing aches, but the pain attacks were recurrent. Eventually, the pain prevented Ayman from practicing the sport he likes, leaving him aching while his fellows were running after the ball.

The physician requested an x-ray, after which he discovered a tumor in his leg. The biopsy test revealed a malignancy.

“By then, I had made up my mind about taking him to Hospital 57357. We all trust this leading healthcare facility and know that it is the best in Egypt and the Arab countries,” reveals the father, Essam Algendy, chess champion of Egypt and Africa during the nineties up until 2005. He added: I immediately took Ayman to 57357. He was on a waiting list and three days later they called me. As soon as we went there, they performed all the required tests and x-rays, after which he immediately started an intensive treatment protocol. The protocol included chemotherapy, followed by a surgery to remove the tumor, then complementary chemotherapy besides physiotherapy.

He went through 6 chemo sessions, after which the tumor shrunk to half the size. Afterwards, the surgery was performed by Dr. Ahmed Elghoneimy, where the tumor was successfully removed, thanks to God. Yet, the treatment journey is still far from being over as he started the complementary chemotherapy sessions which will last several months. He also needs physiotherapy so that he can completely stretch his knee and be able to walk normally.

The father goes on: Ayman is my weak point, I got him at an old age, I am now 55. I cannot bear seeing him in pain. I am a former chess champion, and currently I work as a chess coach. This game needs great concentration, and the number of competitions was reduced because of Corona. Although my work was badly affected with the circumstances, I have pledged to donate to the Hospital whenever I get any income, no matter how small it is. This is what I have been doing since Ayman got sick. My dream is to see my son able to run and play as before, and go back to the sport he likes.

Ayman is still fighting cancer and his family is dreaming about his healing. Still there are many children who are fighting the disease and need your support.

Your donation, no matter how small, will give our children hope in recovery.