“We wanted today to be a special day as we came to convey a message of love and support to our heroes in 57357 With these words, First Step Nursery staff and children started their visit to their counterparts in 57357. The visit included a tour in the Hospital sections, the offering of nice gifts … Continued 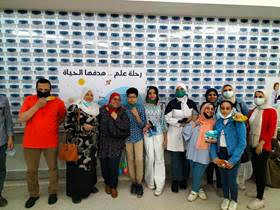 With these words, First Step Nursery staff and children started their visit to their counterparts in 57357. The visit included a tour in the Hospital sections, the offering of nice gifts and finally donating in favor of the ongoing sadaka program to contribute to the patients’ treatment journey. They also presented a video illustrating their support to the Hospital’s children via hopeful optimistic messages, as a gift.

Hospital 57357 also welcomed students of Mustafa Kamel Language School and Alsolb High School for girls, who offered an ongoing sadaka donation and nice gifts to the children while chatting and spending time with them in the daycare.

Thanks to Egypt’s students for their continuous support to 57357’s children. It is noteworthy that school students started their charitable action in favor of the Hospital at the  beginning of its establishment when each student donated one pound of his/her allowance which resulted in collecting 22 million pounds in one day. This money was great support for the Hospital at that time as it contributed to the Hospital building and equipment.  Throughout the last 15 years, students pursued to support their brothers in 57357. In gratitude to Egypt’s schools and desiring to maintain the relationship with numerous schools, the 57357 Foundation’s schools outreach department invites students to visit the Hospital and offers them the possibility to carry out their research and community service within the premises as well as benefiting from awareness lectures about cancer causes and prevention guidelines.