The device uses Electrophysiological methods such as EEG, EMG, and nerve evoked response during brain surgery to limit risk of damage to the nervous system and improve survival rates. At 57357, we are committed to the provision of the latest equipment and technologies that would enable us to improve survival rates and patients ’outcomes. As … Continued 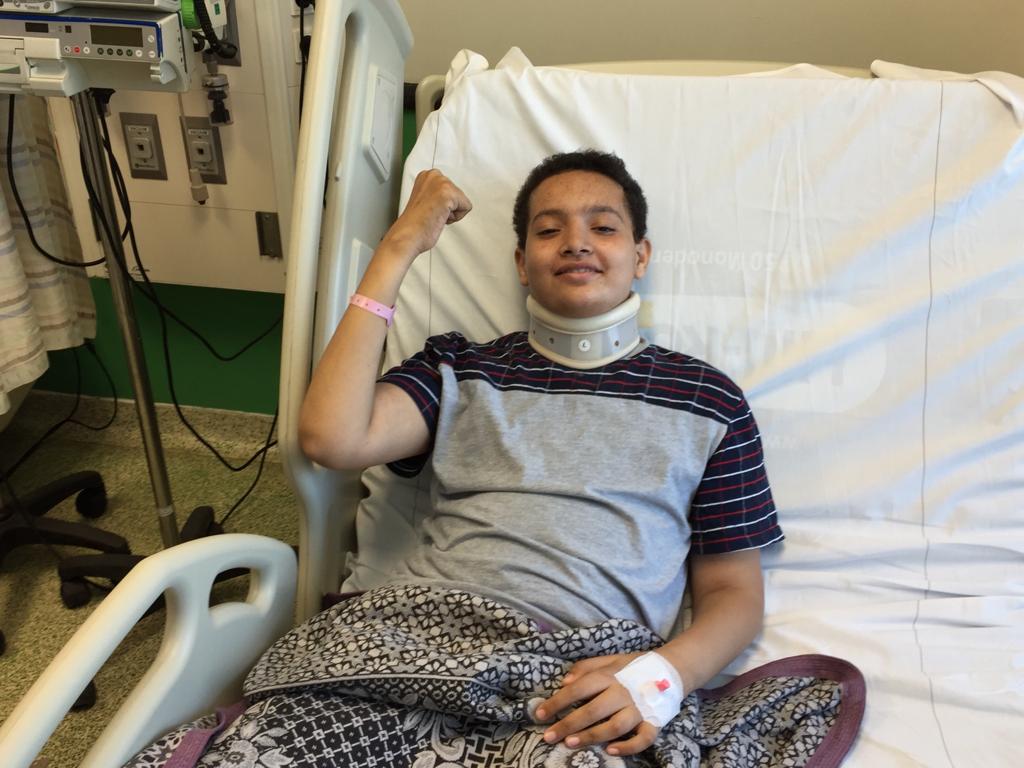 The device uses Electrophysiological methods such as EEG, EMG, and nerve evoked response during brain surgery to limit risk of damage to the nervous system and improve survival rates.

At 57357, we are committed to the provision of the latest equipment and technologies that would enable us to improve survival rates and patients ’outcomes. As such, thanks to a charitable woman’s generous donation, we received the latest device that monitors the functional integrity of neural structures such as nerves, spinal cord and parts of the brain during surgeries.

Dr. Mohammed Albeltagi, head of neurosurgery department, explains that the new device is capable of evaluating and monitoring multiple functions during surgeries as motor and brain nerves, EEG and nerve conductivity besides monitoring the patient’s sensation ability during surgery.

Having this device limits the risks of complex surgeries where the tumor may expand to motor and sensory centers. It helps directing the surgeon to avoid touching parts that may cause complications such as paralysis for the patient.

Dr. Albeltagi revealed that the old device was unable to monitor multiple functions simultaneously while the new one offers more protection for the patient and helps avoiding dangerous complications, especially in the case of spinal cord tumors which constitute 30% of brain/nervous system tumors; accordingly it raises the success rate of complex surgeries of this type of tumor to 85%

The first surgery with the latest version device:

With respect to the first surgery after installing the new device, Dr. Albeltagi shared the following: it was conducted few days ago for patient Mohammed Amr, 9 years who had a tumor in a critical spot between the brain stem and the bottom of the skull where it was connected to motor and sensatory nerves. The tumor had already started to affect the right hand motion.

During the surgery, the brain stem, which is a small and critical part, was opened. Working in this part of the brain needs ultimate accuracy, and the device directed me to avoid touching nerves that may cause complications, specially as the tumor was deeply seated inside the brain stem.

Thanks be to God, we were able to take a specimen of the tumor to analyze it to define its type and specify the suitable treatment protocol. If the tumor is malignant he will need radiotherapy, meanwhile if it was benign he would need chemotherapy to shrunken the tumor so it can be removed surgically, added Dr. Beltagi.

Dr. Beltagi added that thanks to 57357, this type of equipment was introduced in Egypt’s hospitals. Furthermore, the Hospital was organizing a series of lectures and workshops since the purchasing of the first device of this type in 2008, to train doctors from governmental and university hospitals as well as surgeons and professionals from Arab and African countries aiming to raise survival rates of brain and neurosurgeries in this part of the world.

With the acquisition of the latest version of the device, we pursue to sustain our leadership position in the field.