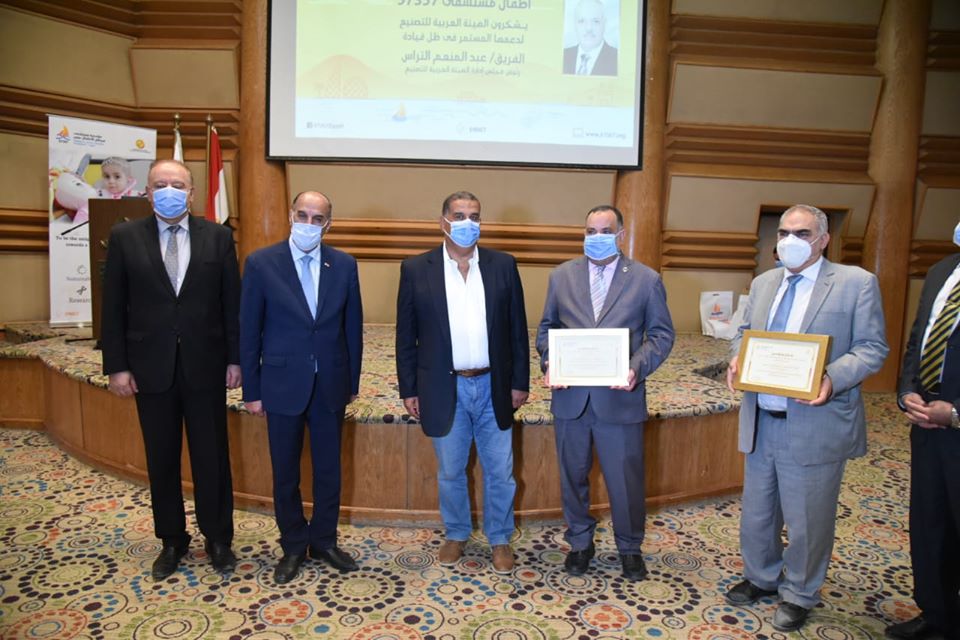 The visit featured the delivery of four disinfection gates to the Hospital in addition to a vehicle equipped to move hot food trollies.

It is noteworthy that the Organization had already equipped the Hospital back in March 2020 with a specifically designed vehicle to move cold food and medications. The Hospital is proud of acquiring such Egyptian made equipment according to international quality standards to offer more protection to the Hospital’s children, employees and visitors.

In his speech, Major General Tawfeek stressed on the continuous support of the Organization to the Hospital which is based on their commitment to  their social responsibility towards Hospital 57357 and its noble mission of offering free quality treatment to children with cancer

He also explained that the disinfection gates  are equipped to spray vapor, not liquid, antiseptics to sterilize people before entering the Hospital premises. They are also equipped with a sensor to measure the  person’s temperature and a sensor that allows it to automatically work when someone enters and stop when he gets out. He added that that the equipped vehicles were designed according to the Hospital’s needs, where they equipped two Chevrolet trucks of the type NKR5000 with isolating boxes with a temperature stabilizer for cold food and with a crane that works automatically to move food, in addition to a Honda electricity generator that guaranties the safety of the food and medications that are being moved.

The Arab Organization for Industrialization has developed evidence-based plans to boost medical equipment manufacturing according to international quality standards, shared the Major General while pointing to the increased market interest in these types of equipment currently because of the Corona virus crisis and the resulting decrease in equipment importing.

In his speech the Hospital’s general manager thanked the Organization for their continuous support and cooperation to contribute to providing the best quality care to our children with cancer. He joined the delegation in a tour of  the Hospital’s departments. At the end of the visit he offered the 57357 trophy to Major Greneral Tawfik and certificates of appreciation to Qader and ABD factories who made the manufactured  the gates and the vehicles, in gratitude for the Organization’s support which has over the years been manifested in continuous donations, visits, and quick response to the Hospital’s requests. We are proud  and grateful for the Organization’s humanitarian partnership with Hospital 57357 in the benefit of our children with cancer specially in times of crisis

The Arab Organization for Industrialization is truly worthy  of the pride of every Egyptian.