While fighting cancer, Malak is taking her high school exam in 57357 to join the Faculty of Pharmacy

I was afraid I would have to postpone my exams and miss the year because of the chemotherapy doses, but at the Hospital doctors, nurses and volunteers encouraged me to study and to take the exam. 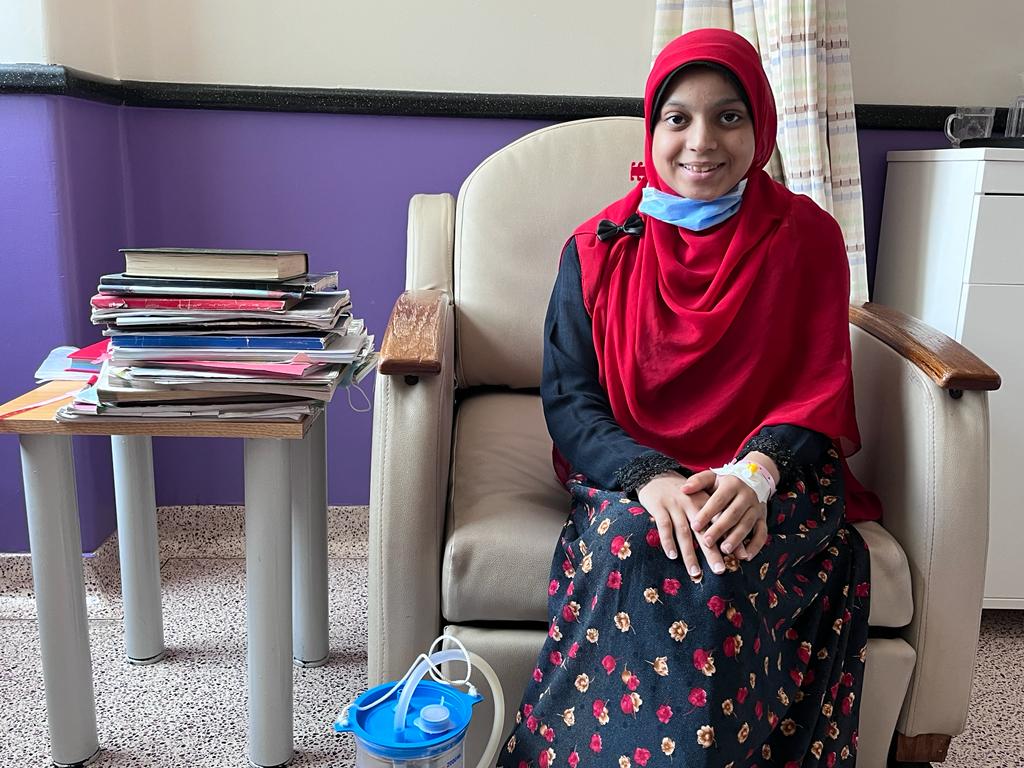 Malak, a 17-year-old girl from Asyout, is one of 57357’s patients who are bravely fighting cancer. She was admitted to the hospital four months and diagnosed with lymphoma. When she came to 57357 she was first admitted to the ICU as her face and belly were terribly swollen and she was in severe pain. She started chemotherapy treatment and she got better.

Al-Azhar high school exams coincided with Malak’s third chemotherapy dose, hence preparations were made to have her exam in 57357. Today was the second day of exams. Chatting with her, she shares: I was afraid I would have to postpone my exams and miss the year because of the chemotherapy doses, but at the Hospital doctors, nurses and volunteers encouraged me to study and to take the exam. Here, in the Hospital they offer me all means of comfort, I take my medications on time and study and have exams, may God grant me healing. I wish to get a high score and join the Faculty of Pharmacy.

Before coming to 57357, I was sick and had very low morale as the pain was severe. After being admitted to Hospital, I received good care and started getting better which contributed to lifting up my spirits. I started thinking not just of recovery but of becoming a pharmacist. After the exams I’ll go back to my hobby of writing and reciting poems. I obtained the second rank nationally for writing and reciting poems for the last 3 years.

It is noteworthy that Al-Azhar high school exams started yesterday with three students in 57357. It will overlap with the general high school exam in June 20, where a bigger group of 57357 heroes will be taking exams that will end on 7-7-2022.

The Hospital is committed to enable its patients to pursue their studies during their treatment period with the vision of securing their hope in a better future. As the treatment period is long, the Hospital established an in-hospital school, the first of its kind in the Middle East and North Africa. The school started in 2008 and receives 200 to 300 students annually. Modern School Egypt 2000 school offers a teaching team for all school grades from primary to high school. The Hospital cooperates with universities to offer scholarships in the different faculties, to high school graduates of the Hospital to help them pursue their future dreams.

Our prayers for success for Malak and all of 57357’s cancer fighters.