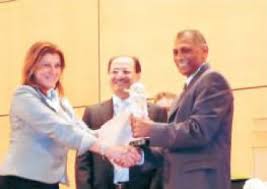 The prize was received by Mrs. Ola Ghabbour, the Foundation’s Secretary General on behalf of Mrs. Suzanne Moubarak, Chairman of the Board of Directors of the Foundation. Also present at the ceremony were Dr.Margaret Chan, Director General of WHO, Dr. Leslie Ramsammy, President of the World Health Assembly, and the representatives of more than 190 nations.

The Emirates Minister of Health welcomed all the guests at the ceremony, which is held annually with the purpose of honoring and acknowledging physicians , institutions or renowned personalities, for their outstanding contribution to the medical field, and their assistance to the WHO in health development and the preservation of health and safety of the human race. The United Arab Emirates Health Foundation Prize was instituted in 1993 by the late Sheikh Zayed Ben Sultan Al Nahian with the firm conviction of the necessity to support the work of the WHO worldwide, so as to be able to ensure to each and every citizen of the world his or her right to decent health and sanitation standards.

Among the previous winners of this award are: Hillary Clinton in 1998, Professor Magdi Yacoub, Renowned Cardiac Surgeon in 2002, and Bill and Melinda Gates Foundation in 2007.